Reality is Not What It Seems 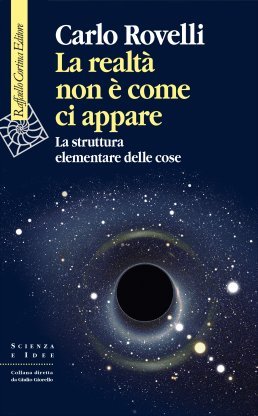 "If we try to combine everything we have learned on the physical world in the XX century, evidence points towards something very different from what we learned at school about space, time, matter and energy. What emerges in an elementary structure of the world where time does not exist, space does not exist, generated by a swarming of quantum microevents. Quantum fields draw-up space, time, matter and light, trading information between one event and the other. Reality is weaved by a net of granular events; the dynamics tying them up is probabilistic; between one event and the other, space, time, matter and energy melt into a cloud of probability".

“Time, space and matter are generated by a swarm of elementary quantum events. Understanding such deep texture of reality is the goal of quantum gravity, major challenge of contemporary science, where all our knowledge about nature is called into question”.
Carlo Rovelli, one of the main protagonists of this adventure, leads the reader to the heart of the investigation in a simple and compelling way. He describes how our image of the world has changed, from antiquity to the most recent discoveries: evaporation of black holes, universe before the big bang, granular structure of space, role of information, absence of time in fundamental physics.

"He draws a vast fresco of the physical vision of the world, clarifies the content of theories such as general relativity and quantum mechanics, brings us to the forefront of present-day knowledge and offers an original and articulate account of the main issues now open. Above all, he passionately communicates the fascination of this research, the enthusasm driving it, and the beauty of the new perspective on the world which science reveals to us".

"How is it possible that Carlo Rovelli has been able to write an essay in physics that kidnapes your attention from the first line to the last like the most absorbing of the novels? This is perhaps one of the few quantions not faced in the book. 'Reality is not What it Seems' is a marvelous book, with a stunningly vast vision of physics."

Foreword: Walking along the sea.

PART ONE – Roots
1.Grains
Is there a limit to divisibility?
The Nature of Things
2. The Classics
Isaac and the little moon
Michael: fields and light

PART TWO - The beginning of the revolution
3. Albert
The extended present
The most beautiful of all theories
Physics or Mathematics?
The Cosmos
4. Quanta
Albert again
Niels, Werner and Paul
Fields and Particles are the same thing
Quanta 1: information is finite
Quanta 2: indeterminism
Quanta 3: reality is relation
But is this really comprehensible?

PART THREE - Quantum Space and Relational time
5. Spacetime is Quantum
Matvei
John
The first steps of the loops
6. Quanta of Space
Spectra of Area and Volume
Atoms of Space
Spin networks
7. Time does not exist
Time is not as we think it is
The pulse and the chandelier
Spin foams
What is the world made of?

PART FOUR - Beyond Space and Time
8. Beyond the Big Bang
The Master
Quantum Cosmology
9. Empirical support?
Signals from Nature
A window over quantum gravity
10. The heat of the black holes
11. The end of infinity
12. Information
Thermal time
Is reality information?
13. The Mystery

Carlo Rovelli is among the founders of one of the main research directions in quantum gravity. He is among the scientists who are most interested in the conceptual and philosphical implications of scientific research. Besides his contributions to quantum gravity, he is known for his work on the interpretation of quantum theory and on the nature of time. He has received numerous recognitions, among which the 1995 International Xanthopoulos award "for execeptional contributions to the physics of gravity". He is member of Istitut Universitaire de France, the Interantional Academie for the Philosphy of Sciences, and honorary member of the Normal University in Pekin. He currectly heads the quantum gravity research group at the Aix-Marseille University. He has published several books for the large public, translated in more then 20 languages.

Press reviews for Reality is Not What It Seems

Reality is Not What it Seems: Review published on Nature published on: 17-10-2016
Download the article