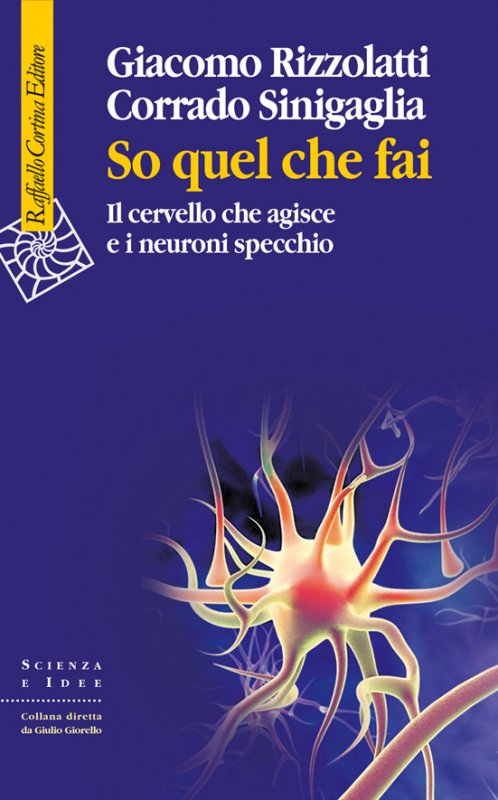 "I Predict that mirror neurons will do for psychology what DNA did for biology".
V.S. Ramachandran

In the early 1990’s, while studying the activity of single neurons in the premotor cortex of monkeys, Giacomo Rizzolatti and his coworkers at the University of Parma discovered that some neurons of this area (today known as mirror neurons) had a surprising property. They respond not only when the monkey performed a given action, but also when the animal observed the researcher (or another monkey) performing that same action.

In the following years, many monkey experiments specified the mechanism of mirror neurons and their possible functions. In addition, brain imaging and other non-invasive techniques demonstrated that a mirror neuron system is present also in humans.

These results had a deep impact on cognitive neuroscience. In essay written on the occasion of the beginning of the new millenium, Vilayanur S. Ramachandran predicted that “mirror neurons will do for psychology what DNA did for biology”. The unexpected properties of these neurons have not only attracted the attention of neuroscientists. Many sociologists, anthropologists and even artists have been fascinated by mirror neurons. The great director and playwright Peter Brook stated that mirror neurons throw new light on the mysterious link that is created each time actors take the stage and face their audience.

The present book provides, for the first time, an accessible and systematic overview of the theoretical issues and experimental work behind the extraordinary discovery of mirror neurons.

From the first pages, the reader will discover how certain areas of the brain – traditionally labelled “motor” areas – have much more complex properties than believed in the past. The motor system – or, as the authors prefer to call it, the acting brain – plays an essential role in perceiving and understanding the objects that surround us. This  “sensorimotor understanding” is very different from conceptual and linguistic knowledge. Nevertheless, it plays a fundamental role in cognition and represents the basis for a variety of cognitive skills.

The view that perception, action and cognition cannot be considered as separate entities is clearly shown by the properties of mirror neurons. When we see someone grasping a piece of food and bringing it to his or her mouth, we immediately know what that person is doing. We do not need to resort to reasoning. Our mirror system automatically codes the visual information from the scene in terms of action, and because that action is part of our motor repertoire, we immediately grasp its meaning.

In other terms, we perceive the observed action as if we were doing it. This is also true for actions that require particular motor skills, such as those of a pianist or a dancer. The sight of an artist playing or dancing activates in the brain of the observers the same areas that respond when they themselves carry out the same actions.

Not only actions, however, are immediately shared. We are linked to others also by emotions. Each of us knows how contagious are fear, disgust, as well as joy. In the past, many reasons were given in order to explain our ability for immediate empathy with others. Only now, however, we are beginning to understand that the various forms of emotional “resonance” are determined by specific, anatomically separated, mirror neuron systems. When we see someone moving away from a glass containing some liquid or from a plate with food with a grimace of disgust, we immediately react as if we were experiencing the disgust. This is indeed what occurs: the sight of an emotional reaction of another person activates, in our brain, the same cortical areas that are activated when we ourselves experience that emotion!

1. The Motor System
2. The Acting Brain
3. The Space around Us
4. Action Understanding
5. Mirror Neurons in Human Beings
6. Imitation and Language
7. Sharing Emotions

Giacomo Rizzolatti, one of the world’s best-known neurophysiologist, is Full Professor of Human Physiology and Director of the Department of Neuroscience at the University of Parma. He was the leader of the Parma team that discovered mirror neurons in the early 1990’s. His studies on the cortical motor system and mirror neurons have been published in the most prestigious scientific journals (Science, Neuron, PNAS, PLoS, Brain. Trends in Neuroscience, etc.) and have had a deep impact on the cognitive sciences debate.He is a member of Academia Europaea, of Accademia dei Lincei, and an Honorary Foreign Member of the American Academy of Arts and Sciences and of the French Academy of Sciences. He is a member of the Scientific Committee of Fondation Fyssen and an Associate Member of the Neuroscience Program directed by Gerald Edelman (San Diego).Among his major awards are the Golgi Prize for Physiology, the George Miller Award of the Cognitive Neuroscience Society and the Feltrinelli Prize for Medicine of Accademia dei Lincei. He has received an Honorary Degree in Medicine from the University Claude Bernard (Lyon).

Corrado Sinigaglia is Associate Professor of Philosophy of Science at the University of Milan. For several years he studied phenomenology of perception and philosophy of action in Leuven, Paris and Cologne. He is also the author of papers on the history of sciences and mathematics, epistemology and foundations of probability.

At present he is a member of the Steering Committee of the Italian Society of Logic and Philosophy of Science and of the “Piero Caldirola” International Center for the Promotion of Science.